ACADEMY OF HISTORY OF HEALTHCARE ART

The Accademia di Storia dell’Arte Sanitaria (Academy of History of Healthcare Art), as stated in the statute, has as its purpose “the diffusion and increase of historical studies of sanitary art in all their aspects and relationships”. It has its seat in a historical building at inside which there is an important medical museum which, known and used by scholars and researchers, has been open to the general public for some years.
The first germ of the Academy dates back to 1911 when, on the occasion of the fiftieth anniversary of the Unification of Italy, an exhibition of health arts was set up in Castel Sant’Angelo inaugurated the same year on March 28 by King Vittorio Emanuele III and Queen Elena. it represented an integral part of other retrospective exhibitions organized to exhibit

artifacts and work tools from various Italian eras and regions on the occasion of an International Exhibition aimed at spreading and consolidating the idea of an ‘Italian civilization’ in the world.
The pharmacy jars and glasses collected on this occasion together with surgical instruments, mortars to produce medicines, an ancient alchemical laboratory and a Roman pharmacy from the 17th century, preserved in various rooms, are now an integral part of the Historical Museum of the Academy, together with many subsequent donations.  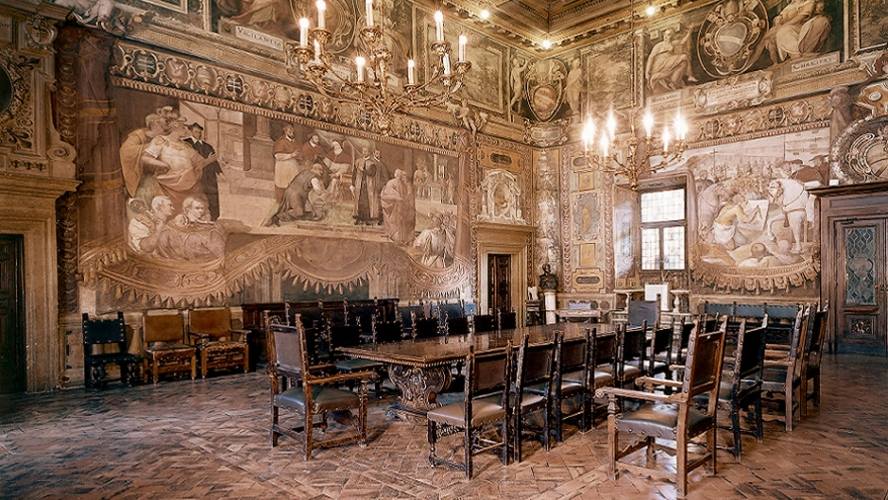 After the closure of the International Exposition, the First World War broke out and the project of the Academy Museum, which was resumed on April 22,1920 with a meeting at the Commendator’s Hall of the Santo Spirito Hospital represented from the Municipality of Rome,the Ospedali Riuniti of Rome, the Order of Malta, the Military Health hospital, and the Italian Red Cross, joined successively by the Mauritian Order and the Ministry of Italian Education .Two years later on May 14, 1922, he was transformed as a Moral Body with RD No. 176. In the same period the statute was approved,establishing that the Academy were to be represented by 150 full members coming from the medical and the biological community together with 150 correspondent , as well as other worthy and honorary
members. On October 16, 1934, King Vittorio Emanuele III signed the RD n.284 by which ISDAS took the name of Academy of History of Healthcare Art, with the official rules published in the Official Gazette n.69 of March 23, 1935.
On November 12 1987 ,With a further modification of the statute , the founding members became : Ministry of Health, Ministry of Defense with the two Army and Marine Health Inspectorates, Ministry of Heritage and Cultural Activities (Ministry Guardian) MIUR, CRI, Municipality of Rome, ASL Roma 1, Order of Malta, Order of SS Maurizio and Lazzaro.
According to the statute, the actual members elect the Council of Regency made up of 12 members and the representatives of the Founding Bodies. This council elects President and Vice President, appointing an Executive Board made up of Secretary General, Vice-Secretary, Administrator and Conservator of Materials who, together with the President and Vice President,establish the nomination of academic directors with the aim to organize regional centers indispensable figures to spread the historical-health culture throughout all the national territory.With a recent decision of the Council of Regency, the Statute of the Academy is being changed again in order to increase the number of Members by inserting other professional categories and streamlining the organizational structure.